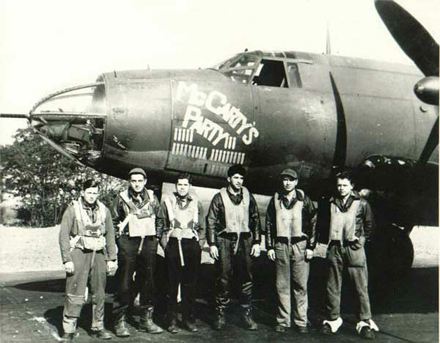 He is the one pictured on the far right: Sgt. Jay L. McDonald, Tail Gunner.

My father joined the Army after the United States declared war on Japan. He was still in high school at the time. I don’t know details of my father’s history, just bits and pieces. However, I did find a web site that featured some information regarding “McCarty’s Party” and their missions of which my father was a part of.

“McCarty’s Party” became the 391st Bomb Group Champion at 159 Official missions, however T/Sgt. William J. Goldstein who was the sole crew chief from factory pick-up to American destruction at war’s end says the figure was 166 missions. It survived one” dead stick “landing, two” belly” landings, one single engine landing, 50 flak holes on her 55th mission, 75 flak holes on her 79th mission plus minor damages of 3 cracked windshields and the usual 2-3 flak holes some where in the fuselage.1

I love this picture of Dad. I don’t know when this was taken and what rank he held at the time.

In the 1960s Dad was the first to fly the B-52 carrying the Hound Dog missile. He had a black and white VHS documentary of the operation that he gave to me. It was cool to see Dad prepping for the mission and updating his crew, Dad in the pilot seat wearing his flight helmet and flying the bomber. The video also showed the plane being refueled in mid-air. Wikipedia even listed information about the mission Dad flew.

On 14 January 1960, Eglin AFB conducted the first test launch of a rocket-borne transmitter.

The first GAM-77 Hound Dog missile assigned to the Strategic Air Command was carried aloft for the first time on 29 January 1960, aboard a B-52G-75-BW Stratofortress, 57-6472, c/n 464177, of 4135th Strategic Wing, commanded by Capt. Jay L. McDonald. The strategic missile was carried on the port underwing pylon during the flight that lasted more than four hours. An operational test of the GAM-77 Hound Dog first took place over the Eglin water range on 31 March 1960 when a B-52G of the 4135th Strategic Wing launched the missile from a point near Tampa, Florida, which then flew several hundred miles NW to hit a target in the Gulf of Mexico off the northwest Florida coast. This test followed a series of successful flights over the Atlantic Missile Range at Cape Canaveral as well as on the test ranges of Eglin.

On 11 April 1960, a 4135th Strategic Wing B-52 crew took off from Eglin AFB, carrying two operational Hound Dogs, made a 20-hour, 30-minute flight to the North Pole and back, and on 12 April, launched a Hound Dog missile over the Atlantic Missile Range. This test, called Operation Blue Nose, verified the ability of the B-52 and missile to operate in temperatures as low as 75 degrees below zero.2

My parents divorced while I was young, but Mom always encouraged me to stay in touch with my father. Even though he wasn’t physically present during my formative years (we lived far apart), I was not without a present father figure. Mom remarried and my second dad loved me like I was his own. My father and I stayed connected though through letters and the occasional phone calls. He passed away while I was in college, and that’s when I began to regret getting to know him more. I often daydream about the conversations we would have now that I’m an adult and know more about life.

My father loved the military; it was his life, his family and his career. I’m grateful for him, for all he accomplished while in the Army and the Air Force. I’m grateful for all the men and women of the armed forces and for their families. God bless their courage, dedication, commitment, valor and sacrifice.